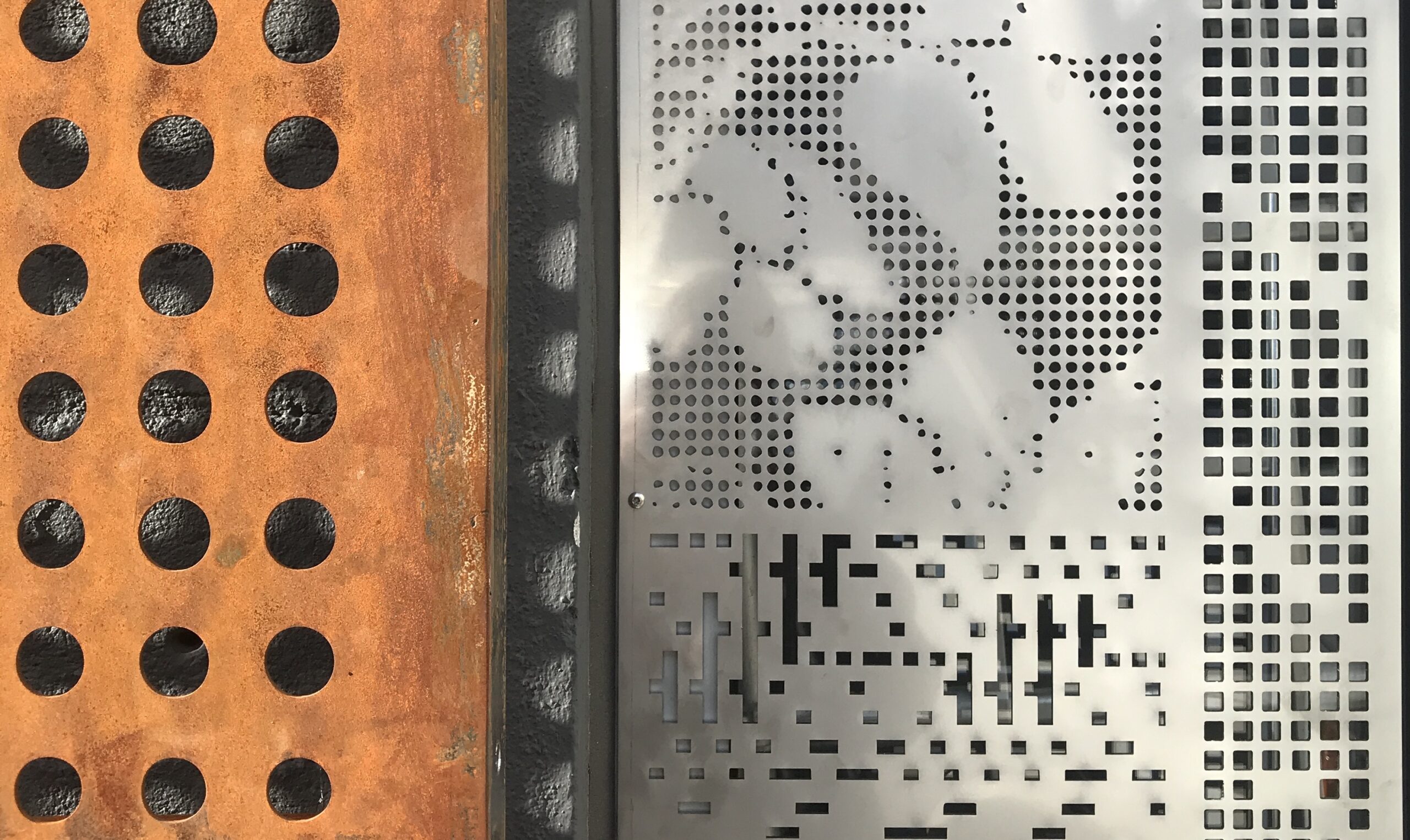 Situated on the building’s facade, Draw Close takes the form of movable steel screens that conceal and reveal KARST’s entrance. The surface of the screens is perforated with holes that create an illusion of draped fabric in halftone – a 20th-century printing technique in which patterns of dots create images. This image makes reference to the nearby theatres and entertainment venues on Union Street where space is punctuated by the opening and closing or rise and fall of the curtain, and its presence can lend a sense of suspense, mystery or excitement.

The sculpture is an architecturally scaled, kinetic work composed of two parts. The main material of the sculpture is Corten steel, characterised by a deliberately rusted coating that protects the steel. The artist draws an association between the rich orange colour and finish of the rust and the heavy velvet of stage curtains. When these sliding Corten screens open they reveal an inner layer of delicately perforated stainless steel side panels which are more resonant of net curtains.

The artist says: “The sculpture has pushed the print methodologies and processes that I usually work with, enabling me to explore working with metal beyond its usual role within my practice as a printing plate holding the information of an image.”

The ornate perforations in the sculpture’s side panels look to the stylised floral imagery of lace curtains, referencing associations of domestic space. The design of the perforations on the public sculpture are conceived as samplers for a ‘Plymouth Lace’, featuring stylised representations of regional wildflowers, created using a dot structure reminiscent of punch card weaving or lace making techniques. The Speedwell (Veronica chamaedrys) and the Mayflower (Convallaria majalis) – another name for Lily of the Valley – are both wildflowers but in the context of Plymouth have strong reference to the city’s role in the colonial settlement of America.

Ben Borthwick, Head of Creative at KARST says, “Commissioning a permanent, functional artwork on the outside of KARST’s building demonstrates our commitment to the ways artistic practice can open up conversations with our neighbours and audiences.” He continues, “We couldn’t be happier with the welcome this sculpture extends to anyone who visits KARST.”

The exhibition broadens the metaphor of the curtain from the public commission by expanding on the notion of thresholds between public and private space. New works by Andrews make reference to the role that cultural, political and technological histories of decorative and applied arts have played in social change with the artist’s unorthodox approach to printmaking translated through a range of materials. The process of layering and the different stages that an image goes through is something that Andrews takes across materials, influenced from her background in printing.

Large architecturally-scaled works occupy the main expanse of the gallery space, contrasting with an intimate ‘viewing room’ to the rear of the gallery – referencing the division between public and private. Domestic scaled works within this room exist as samplers for hypothetical products and include prints, paintings, and smaller metal and textile pieces.

Works in the main gallery space which include a large kinetic installation, aluminium sculptures and printed works, tie together different strands of Andrew’s practice making connections with the artist’s approach to materiality and the application of ornament.

Andrews looks to textile history’s role in documenting scientific discoveries and the plants of a particular time and country. Floral depictions now commonplace in everyday domestic items – such as the net curtain – stem from these scientific studies, abstracted either through their method of production or an artist’s hand.

The works on show also explore methods of halftone screening to create binary imagery which Andrews embraces and exaggerates throughout the exhibition. The process, derived from proto-computer programming, generates new imagery through a set of manually controllable variables that can be manipulated to hold a certain amount of detail but never produces an exact representation of the original image.

Soft Edges, Draw Close opens at KARST gallery on 25 March 2022. The exhibition closes on 28 May, while the sculpture will remain a permanent part of KARST’s facade. A limited edition print and publication have been produced to coincide with the exhibition. The print will be available to purchase for £75 from the gallery. The publication has been developed with Foolscap Editions, an independent publisher that works in close collaboration with artists. A book launch will take place on 5 May in collaboration with Queer District Collective at KARST.